Jennifer Woodward has been using our Microchip Cat Flaps to help protect and manage the hedgehogs that she rescues and houses until they are well or old enough to be released back into the wild. We got in touch with her to find out more about her hedgehog rescue service and how the cat flaps are helping the hedgehogs in her care. 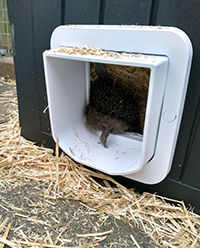 The cat flaps are especially important in the houses I have designed to give protection to the likes of our blind, long-term hedgehog and to prevent overcrowding in any one house. It has taken the hogs no time at all to figure out the cat flaps. They are inquisitive creatures that use their noses to guide them and generally bang into things! I've found the whole mission a complete success.