We spoke to Gilly to find out how the SureFlap Microchip Cat Door has helped her cat Lemmy to recover from Feline Idiopathic Cystitis, and how it’s helped him to feel safe now that the neighbor’s cats can no longer get into their home.

Can you describe Lemmy’s illness prior to installing the cat door? 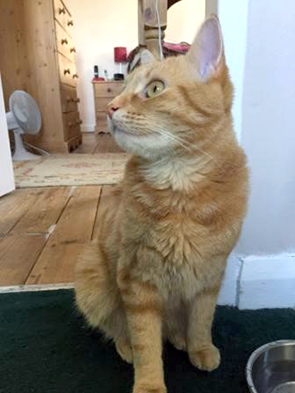 Our little boy Lemmy was about 17 months old when he was taken ill with a very nasty case of stress induced FIC (Feline Idiopathic Cystitis). As soon as the vet mentioned stress, we knew right away it was due to two of the neighbor’s cats, who had gotten in the window and on the second occasion we heard and then found Lemmy underneath the raider cat with tummy fluff going everywhere. This caused severe inflammation in his bladder and urethra which resulted in a blockage. He was sedated, catheterised and they flushed the blockage twice, and sent him home with medication. The third time they decided to keep him in and keep the catheter in for at least 24 hours until they were happy he could pass urine on his own. He spent about four days in the vets. He was also on medication for a few weeks after coming home.

Why did you choose a SureFlap Microchip Cat Door?

My son in law and daughter had mentioned these to us as they have a SureFeed Microchip Pet Feeder for their cat Comfort, and we’d also seen one of the cat doors set up in the veterinary practice waiting room.

How long did it take Lemmy to learn to use the new cat door?

I’d say it took him a couple days to get really comfortable with going in and out by himself; no more than that.

Has Lemmy’s behavior changed since installing the cat door?

This is one of the biggest things we’ve noticed in him. He now lies all over the house instead of up on the top bunk in my daughter’s room. He spends a lot more time in the living room with us and he seems much more relaxed in himself. We’ve even had more cuddles since he’s been home and had the cat door security. We’re pretty sure he knows no other cat can get in as he happily lies just inside the back door looking out! He’s now a very chilled little boy. We even noticed after the cat door had been in a few days that he was spraying the hedge to mark his territory, which we’d not seen him do before.

Has his health improved now that the neighbor’s cats can no longer get in?

Yes, so far we’ve had no recurrence of the FIC and his toilet habits have returned completely to normal. He hasn’t had any accidents indoors in weird places and he uses his trays as well as outside.

Would you recommend the product to other cat owners and if so, why?

We absolutely would recommend this product as it’s given both Lemmy and us great peace of mind. We can now go out and know that he can please himself as to whether he goes out or comes in.

Just to say thank you very much for making such great cat flaps and for excellent customer service.

In the Pidler home... 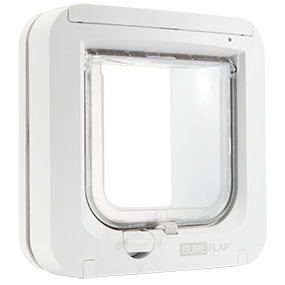