Household protected for ten years thanks to Microchip Cat Door

Chris Higgs has been a Sure Petcare customer for ten years, and as part of our 10th Anniversary campaign, we got in touch with her to find out how our SureFlap Microchip Cat Door has helped her cats over the last decade.

“We knew about cat doors which were controlled by discs on collars, but this was not a good option as we replaced Cricket’s lost collar on a monthly basis. He was an avid hunter. I’m not sure where we first came across microchip-controlled cat doors. They were not to be seen in vets or shops as they are nowadays. There were two types; one which had a sticky out bit on top, was powered by an electric lead and access was programmable timewise, and the SureFlap, nice and neat, but worked by batteries. We’d have broken our necks on a trailing lead as our back door was nowhere near an electricity point, so SureFlap it was!

“It was delivered in July 2008 and we duly installed it. The girls used it straightaway – no bother – but Cricket was a complete wuss.  Its catch clicked and frightened him… he was not going through that!  I contacted SureFlap and explained the problem.  Andy Bank (Commercial Director) replied to us, sounding like someone who actually owned a cat which had learned to use this style of door.  He made lots of suggestions and sent us a new door, which was under development, to try.  It had a longer tunnel, but a quieter catch click. Cricket found the longer tunnel difficult because he had had his hip bone pinned and had a slightly protruding lump there. He declared the click still too loud, anyway, and so it was returned with thanks. Eventually Cricket’s need to go in and out and our efforts to tempt him through won after quite a few weeks, and Cricket was finally a SureFlap user. 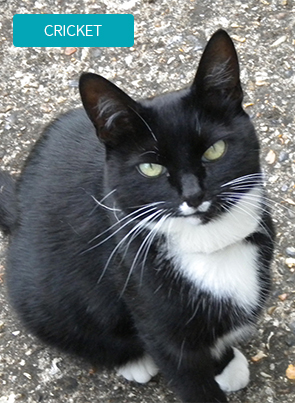 “In June 2009 the door ceased working. The catch had stuck irretrievably down.  I wrote to Animalcare, where I purchased the product from, to take up their one-year replacement guarantee. During this time, however, the improved door with the deeper tunnel had been brought on to the market. I asked if they might have an old version with the shorter tunnel we could have as a replacement. They contacted SureFlap and Nick Hill (Managing Director) got in touch with us offering us a re-conditioned version with a new front and an old tunnel back – perfect!

“Every so often the magnet which held the door shut jumped out of its slot with age, mud and Cricket smacking the door from the inside at the Ginger Tom to shoo him away. SureFlap provided spare clear doors for us to insert easily with detailed instructions.

“In 2011, we built a garden room extension which involved a new back door. We decided that a new cat door was in order too and contacted SureFlap to see if they could provide one with an old shorter tunnelled back – they did. This has a new style door where the magnet is completely enclosed and protected. With this new back door, Cricket was able to leap in through the door and bounce straight up onto my lap in one go, and we are not aware of any unwanted cats ever coming in.

“Cricket was fatally hit by a vehicle in 2016 (aged 16) on a hunting expedition and Minke died last year aged 19. The Ginger Tom disappeared a few years ago. His antisocial behavior was replaced by Stinky Cat, who again attacked local cats, made smells and invaded non-protected houses. He has no owner and was subsequently trapped and neutered. He lives happily in the village now, being fed by a few people and causing no nuisance. Muffin, Cricket’s sister, now 18, is still with us. She loves the clear flap door from which she can watch the birds. Occasionally she will dive through in one jump to chase off our neighbors’ cats who dutifully still run away from her.

“Our 2011 door requires little maintenance. To us a wise and valued purchase, readily recommended!”