Collar-free cat flap keeps cats safe in their own home

As part of our 10th anniversary campaign, we got in touch with Mandy Atkinson, one of our earliest customers, to find out how the SureFlap Microchip Cat Flap has helped her pets over the years.

When we bought the first cat flap, we had Missy and Ella, (litter mates) who were about 6 months old at the time. That was in 2006. Ella died nearly two years ago, and we have recently got Scooby to keep Missy company.

Which Sure Petcare products do you own?

Can you remember where you first heard about Sure Petcare?

I think I heard about them via a leaflet at the vets.

Is the original product you purchased still in working order?

No, we had problems with it when we moved to our current property about two years ago. That cat flap had been installed in five properties!

What steps did you take to get it fixed?

We contacted customer care when we were having difficulty with our original SureFlap. They were actually really helpful. It was also really personal; I didn’t feel that I was ringing a huge call centre where I was simply a customer number – I felt like I was talking to a person who actually wanted to help me sort it out. They helped us replace the working parts, as the rest was ok. The majority of the cat flap was still fine, despite having moved house with us very frequently over the last four years. We had needed to install it this time into a double-glazed glass window, so we had purchased the mounting adaptor and our glazier installed it. The cat flap itself stopped working shortly after that. 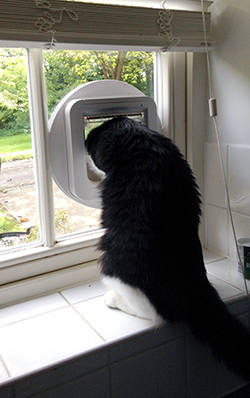 If you bought any additional products, why did you buy them?

Last year, we bought an identical cat flap for the back door, as Missy was finding it difficult to jump up onto the window ledge outside and push herself through – her back legs seemed to find it difficult to find ‘purchase’ on the brick ledge. Our door is ‘easy access’ so no ledge, and therefore easy to work out what height it needed to be for her.

How has the product helped you?  What problem has it solved?

Initially, we had found that other neighbourhood cats were coming in (breaking the door) of the magnetic cat flap we had. (Missy and Ella were small and the vet had advised us against collars – to which we could have attached a magnet –  until they were large enough to break the clasp if they became entangled in a tree). So, finally, thanks to SureFlap, no more terrified cats! Until our current property, we rarely lived anywhere with a very dense cat population, so it hasn’t been much of a problem, but just knowing that they are safe if we go out is great for our peace of mind.

Always! We always recommend the SureFlap Microchip Cat Flap to cat friends! It means that cats can be ‘au naturel’ and not wear a collar. Everyone we recommend it to has been very pleased with it.

No – no need. Very happy with SureFlap. No hesitation to use and recommend.