Emma’s cats each use a Microchip Pet Feeder Connect, which gives them exclusive access to their food and gives Emma the ability to control how much she feeds them to ensure they don’t overeat. We got in touch with her to find out how her cats, Captain and Salem, are getting on with them.

How have the Microchip Pet Feeder Connects made a difference at mealtimes? 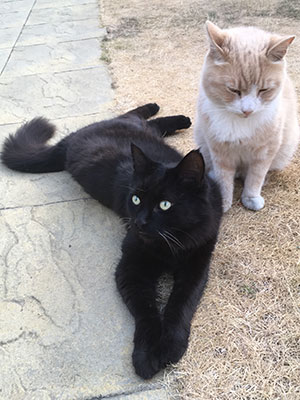 Overall, the feeders have worked really well. They were easy to set up and having them has added a new dimension to our understanding of what the cats get up to. I’ve learnt that Captain likes to graze whereas Salem likes to eat everything in one go. By having the feeders, it makes things nicer for the cats because it promotes a more natural way of eating for each of them.

The feeders have also made things a lot easier for us as a family as we used to have to move Captain’s bowl around so that Salem couldn’t get to it as easily and eat any food Captain had left. Now I can feed both cats together without having to worry.

I like the fact that I know that the cats are now getting exactly what they should be in terms of the amount of food, and I can use the portion functionality to put in the exact, recommended amount of food to help them maintain a healthy weight. The LED light indicators are fab.

I used to use a measuring scoop to dispense their food, and very early on I would weigh out the food and work out how much there was in the scoop. But due to a busy lifestyle with lots of distractions, I am sure I would sometimes put in more than the correct amount. With the feeder, I now know the cats are getting the same amount every day, and overall, I think it’ll save me a bit of money on food.

How were the feeders useful when you left the cats with a pet sitter?

The pet sitter found the feeders easy to use. It was nice to see remotely what sort of times she was coming to the house because we received a notification each time she filled the cats’ bowls. She had some concerns about one of the cats as he wasn’t around when she called but I could assure her that he had been because I received notifications each time he ate from the bowl, and she could see that he had eaten his food as he is the only cat able to access his feeder.

Do you feel more aware of your pets’ eating habits?

Yes, I do. Captain graze feeds now whereas he used to beg for food, probably because Salem used to eat his leftovers. The feeders allow Captain to eat more naturally and stops Salem eating more than his share. As a result, Captain no longer begs for food at night. I can be sure he is getting the correct amount of food for his size as I know how much he has eaten during the day.

Would you recommend the product to a friend?

Yes, I have already. 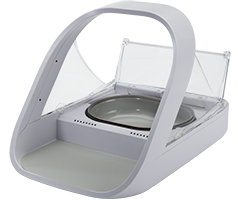