Martina Russo leads a nomadic lifestyle, enjoying her love of travel and climbing whilst working remotely on her translation business. Her two cats, Milù and Simba, were strays who effectively adopted her, leaving her concerned that her travelling days may have come to an end. But she took to the road in her partner’s van, installing a SureFlap Microchip Cat Flap Connect in it to give her cats freedom and herself peace of mind, and she never looked back. 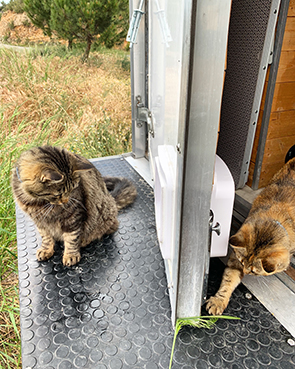 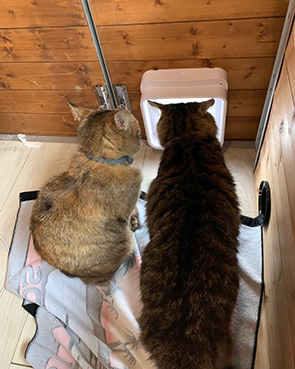 We got in touch with Martina to find out more about her lifestyle, how her cats are coping with life on the road and how the SureFlap Microchip Cat Flap Connect is making a huge difference to her cats’ comfort and how it gives her peace of mind when she’s not with them.

Where have you travelled to with your cats?

I’ve been living in many different places for the past 10 years. Both cats sort of showed up out of the blue when I was living in the Italian Alps, last year in February/March, and I had to decide whether I’d give up my independent lifestyle to keep the cats or travel without the cats. I then found out they’d both been abandoned and decided to move around with them.

Over the past year or so they had moved home with me three times (Alps – seaside – Alps), and we have now taken off on a rock-climbing tour around Spain and Portugal in a van. So far, we’ve been on the road for four weeks. We first did Alps to Spain by car, which was an 18-hour car drive, before arriving in Spain to meet my partner with his van, and we have been living in the van around Catalunya since then.

How have your cats adapted to life on the road?

They don’t really seem to enjoy the movement when we’re travelling. They’ll meow nonstop when we’re moving. I suspect it’s because they really like their freedom and do no appreciate being locked in.

When we stop in a new location though, they spend the first two days exploring everything with little time spent in the van before settling down. It works for us because we don’t move all the time. We pick a new place where we can stay for 2-4 weeks to climb and work, because my partner and I both run our businesses remotely.

Why did you decide to purchase a Microchip Cat Flap Connect?

Both cats are stray, mountain cats and they really like their freedom. Simba in particular goes nuts when he’s locked in. I was worried we would have to spend lots of sleepless nights at the rhythm of his ‘let me out NOW-meows’. Also, I didn’t want to lock them in or out every time we’re not around.

My partner had the idea of installing a cat flap, which I initially thought was a crazy idea. When he ran a Google search, the Microchip Cat Flap came up, and with it the Connect with Hub variation. When he told me about all of the features that came with the Connect model, I just decided we needed one right then.

We get away from the van using my car almost every day and knowing where the cats are when we’re out and about gives me peace of mind. They are as free as they were back home – in fact, even more so!

Also, I can lock them in or out in extreme situations e.g. when one of them needs to take medication and won’t have any of it, and tries to run, or if the surrounding area isn’t safe enough.

How did you find the setup of the Microchip Cat Flap Connect?

Setting up the cat flap itself was easy. However, for the Hub to work, it needs to be connected to the Wi-Fi, which obviously must be on at all times. Also, the Hub needs to be wired through a LAN cable.

In the van we do not have any W-LAN wiring, so we got around it by purchasing a client bridge that we keep plugged into the electricity outlets connected to our mobile Wi-Fi router – which is also constantly plugged in to the solar-powered van, and it’s set up with a UK data SIM card with UK-based data plan we can use abroad.

Has the cat flap solved any particular issues that you previously experienced?

When the van is parked up, Simba hasn’t meowed once! It’s definitely been a massive help for both our cats’ freedom and our ears.

Has the cat flap provided you with more control over your pets’ access?

We haven’t used the curfew mode so far and don’t plan to do so anytime soon, but the cat flap options to lock cats in or out has been useful to prevent them from going outside when we’re parked somewhere unsafe or when we need to travel.

Has the cat flap enabled you to have any further insight in the behaviour of your cats?

Yes, we now know exactly how long they both stay outside or inside and how many times they come through, which is especially funny and useful to see what they’ve been up at night. Also, it’s very useful to make sure they’re safe when we’re away from the van. If we haven’t seen any movement for 6-7 hours, we make our way back and to check on them.

Did you notice any changes in your cats’ behaviour after installing the cat flap?

I think both cats are simply more relaxed and have stopped meowing, because they know they have the option to go in an out as they please.

Does the cat flap make you feel more connected to your cats?

It definitely gives me peace of mind, more than anything else.

How often do you use the app and when do you interact with the app most?

Every day, multiple times a day. Mostly when we wake up and have heard lots of movement overnight, or when we’re away and want to check they’re OK.

Do the notifications provide any additional insight?

Have you shared access to the app with anyone such as friends or family?

Both my partner and I have the app on our phones and use it – he probably uses it more than I do!

Would you recommend the product?

In the Russo home... 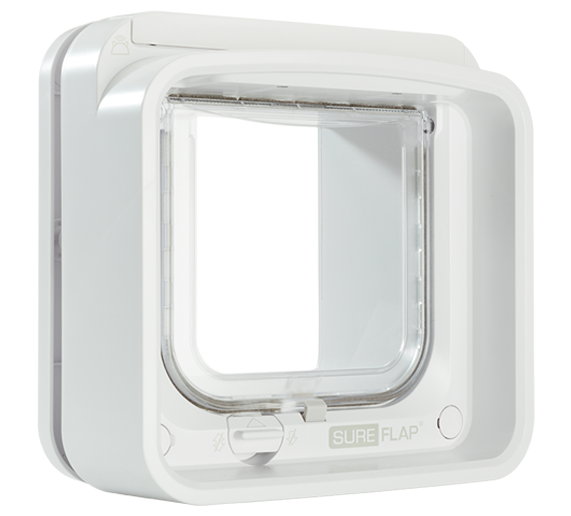